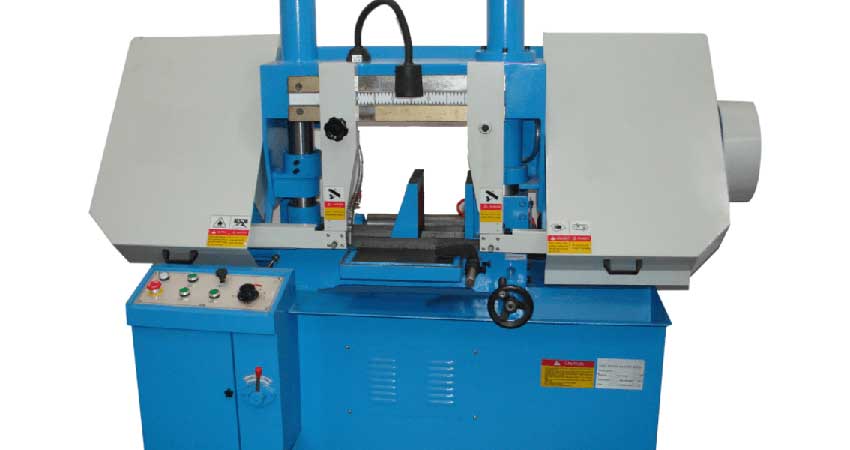 Your Guide to the Different Types of Band Saws

Band saws come in many different shapes and sizes, each with their own unique selling points and purpose. The band saw is regarded as one of the most versatile power tools on the market according to Popular Woodworking Magazine, renowned for its ability to cut through just about any material, however, it is not often the first machine purchased for a workshop.

The material you’re working with any type of project you’re completing will determine which of the different types of band saws to use. Vertical or horizontal, meat, timber, and metal cover just some of the band saws available.

This article will take you through some of the different types of band saws and some of their common uses, as well as a general guide to band, saw safety that can apply to any type of this powerful tool.

Of all the different types of band saw, a metal band saw is the ideal power tool for jobs that require you to cut through tough metal.

They do require some extra maintenance though and generally have some additional features built-in. A coolant that keeps the blades lubricated and cool, as well as brushes or brush wheels that prevent metal chips from being caught in the blade, are both common to find on these types of band saws.

Unlike other saws, band saws have the unique ability to cut through a range of materials other than just wood, making them a popular tool in most workshops. Metal band saws are ideal for projects that involve:

While smaller stationary band saws are used in workshops, timber mills also operate large scale band saws for ripping lumber. The band saw has the unique ability to work with timber that’s of a larger diameter, and because they have a smaller kerf, or cut size, there is less of the quality timber wasted.

Wood band saws operate the same as any band saw, with the blades located on a continuous loop of metal teeth which perform succinct cuts through the timber. Inside the wood band saw category lies another subcategory, with saws of varying sizes and blades, each designed for specific use:

A meat band saw is used for cutting and carving various types of meat. They’re generally made from stainless steel and are constructed so that they’re easy to clean and maintain, due to the sensitive material they work with.

Meat band saws are a butcher’s best friend, but not only reserved for the professionals. Many passionate meat lovers have their own meat band saw at home to create perfect cuts of steak and lamb. They also have the added ability of extra features, such as sausage making spout or mincer.

Professional butchers and farmers use a meat band saw to divide their meat for sale, as they provide a precision cut that’s tough enough to slice easily through thick bonesas well.

Meat band saws are responsible for a large percentage of the injuries obtained from the different types of band saws, so new technologies have been introduced that can detect appendages that have come in contact with the blade.

In New Zealand, where meat production is particularly high, the Meat Worker’s Union recorded 18 serious injuries within 12 months due to accidents with a band saw, making them quite a risky machine to use.

The horizontal band saw is one of the broader categories of the band saw, favored by both amateur and professional carpenters. These types of band saws are useful for cutting longer materials down to size, however, not so ideal for producing complicated shapes or curved lines.

A horizontal band saw works by holding the material stationary while the band saw blade swings down through the cut. Once the cut is complete, the saw will automatically turn off with a switch trip to avoid potential injuries to the operator.

Some of the benefits of using a horizontal band saw include:

A vertical band saw varies from its horizontal counterpart in how it cuts through the material. The saw itself doesn’t move, but rather the workpiece moves through the blade to create intricate cuts.

These saws have a superb cutting capacity and the ability to cut through materials fast, and with brush wheels installed they have safety measures in place to ensure chips don’t become stuck in its metal teeth.

Not only is the vertical band saw capable of cutting with ease, it also usually features a built in welder. The welder is useful for creating new blades or repairing old ones, and can even route the blade through the center of a part so that it can make interior cuts to the material.

For people who need to use their tool on the go, or have many different jobs in different locations, a portable band saw would be a wise investment.

Portable band saws can be used to cut straight edge cuts, curved lines, or irregular shapes, so they show real versatility.  A handheld band saw works with the same technology as other types of band saws, with a continuous band of serrated metal pulled along two wheels to perform its cuts.

Not just ideal for those who work on the move, the portable band saw can be helpful in cutting stock that’s too large for a regular band saw, or even on those projects where you can’t physically bring the workpiece to your machine.

These machines have so many uses that they’re a popular choice for amateur carpenters as well as larger scale workshops to have on hand. Portable band saws can:

Although they’re often touted as one of the safest power tools around, you still need to be aware of the safety precautions for operating a band saw. A stationary band saw poses less of a threat than machines with a movable blade or saw which lowers their risk for injuries.

According to the Fine Woodworking Magazine, there are 12 cardinal rules for band saw safety that should be followed. These rules apply to all types of band saws and apply to working with any type of material, however, some styles may have extra rules regarding their safe operation.

Not only is the band saw adept at making curvaceous cuts, but they can also perform precision cross cuts and rip lumber. If you have a quality band saw in your workshop you’ll already know how smooth their cuts can be, and performed with minimal effort.

Band saws-all operate on the same system, regardless of their intended use, using a pulley system and wheel to move the blade around. It’s this system that allows for a safer cut due to the reduced risk of kickback, making this power tool a lot securer than a table saw.

If you’re looking for a band saw for your workshop, you’ll need to determine how much space you have available. There are some amazingly powerful and Best benchtop models that can still get the job done without taking up too much room.

If it’s your first time using one, don’t just assume you’ll be able to get it right the first try. Like any powerful tool, it takes skill and practices acquired over time, so begin with some test materials first.

Learning the tension of the blade is crucial to perfecting the use of this machine, but this amount will differ depending on your workpiece, blade, and the model of the band saw you use.

Although they can be a little tricky to maneuver at first, once you’ve gotten the hang of your band saw you’ll wonder how you lived without it in your workshop. With all of the different types of band saw available, it’s amazing to see how many advancements this power tool has made since its humble beginnings in the 19th century.