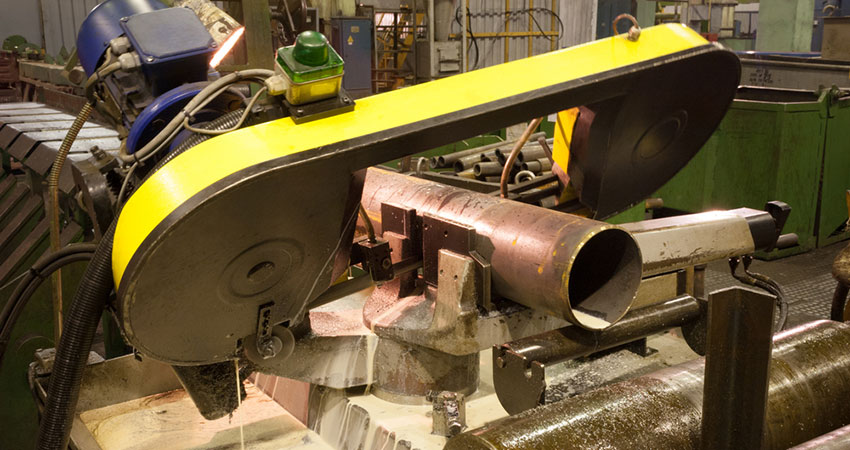 Our Overall – Top Pick (In a Hurry)

After careful consideration of these three amazing machines, the clear winner in both price and power is the Milwaukee 6238-20 AC/DC Deep Cut Portable Two-Speed Band Saw.

With its impressive 11-amp motor and deep cut capability, it’s a standout power tool that won’t fail you on the tough jobs.

What is a Portable Band Saw?

A portable band saw is a power tool used for cutting irregular or curved shapes but it’s also handy for performing straight edge cuts as well. A band saw uses a continuous band of serrated metal to cut various materials with speed, usually with the help of two rotating wheels.

Portable band saws do exactly as their name suggests, and are able to be carried around from job to job. Due to this ability, they’re the preferred choice for larger projects where the material might not necessarily fit into a larger scale band saw or times where you need to take a band saw out of the workshop to operate it.

After considering the most important functions when purchasing your portable band saw, you’re now ready to begin the hunt for your ideal machine.

We’ve compiled a list of the top three portable band saws on the market that offer strength, versatility, and precision. Which machine you decide on will depend on your intended use and projects, and what additional features might be useful for your work.

One of the most popular brands of band saws available, Milwaukee has a solid reputation for creating durable and refined power tools. The 6238-20 AC/DC Deep Cut Portable Two-Speed Band Saw features a powerful 11-amp motor for maximum performance and durability.

Overall, the Milwaukee 6238-20 AC/DC Deep Cut Portable Two-Speed Band Saw shows the fantastic value for money. Its versatility with materials and strong durable frame means you won’t need to invest in another band saw for years to come.

This DEWALT portable band saw kit comes with a power tool, a band saw blade, hex wrench, and box for storage. Featuring 5-inch-deep cut capacity, it is versatile for use with a range of materials. Its patented 10-Amp motor means it’s full of torque so won’t give up on your when you need it most.

The DEWALT DWM120K 10 Amp 5-Inch Deep Cut Portable Band Saw Kit is a durable machine, which was easy to see on its first use. The DEWALT brand overall is known for quality, and this portable band saw is no exception. It sits about mid-range in the price scale, so it’s worth every cent. Its 10-amp motor ensures it will make short work of a range of materials without losing its strength.

The Makita XBP02Z 18V Portable Band Saw offers 6 variable speed settings that allow the user to adjust according to the material. Makita pride themselves on their motors and this machine is no exception, with a cutting capacity of 274-530 feet per minute. Although it has the possibility for battery operation, this particular model doesn’t come with the battery pack attached.

Makita is no stranger to industrial machinery, and their portable band saw is a testament to their years of customer satisfaction. This machine shows amazing strength and durability, so although it was a little heavier than other models it’s proof of the quality of materials used in its construction.

The Makita XBP02Z 18V Portable Band Saw is a robust machine, but there are perhaps others in its price range that might be more worthwhile purchasing.

Portable band saws aren’t only a tool for the home handyman, but often an integral part of larger scale workshops too. Thanks to their versatility, the range of portable band saw uses is nearly endless:

What are the Parts of a Portable Band Saw?

A portable band saw works under the same method as a cabinet band saw, just on a smaller scale.

The Power Tool Institute recommends inspecting all parts of your portable band saw before each operation, as failure to do so can result in the blade or wheel pinching, binding or stalling, causing you to lose control of the tool.

How to Choose the Best Portable Band Saw

There are a few things to consider when choosing the right portable band saw for your project, and they can be applied to the purchase of just about any power tool.