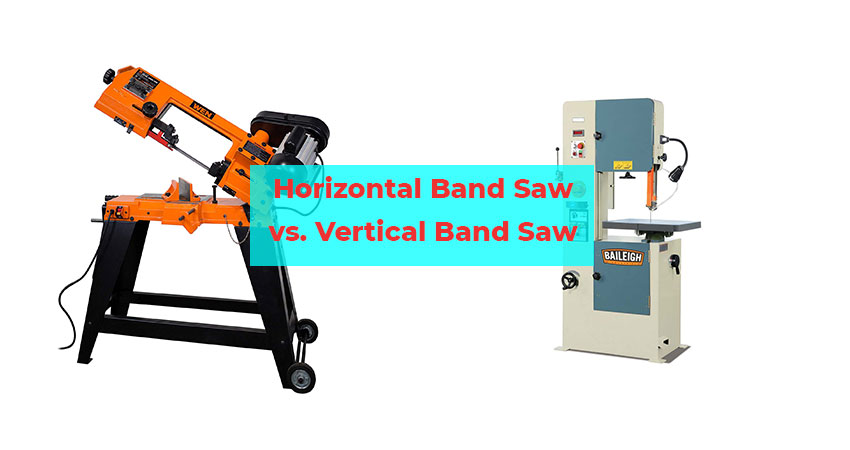 The Band saws come in so many different types that it’s impossible to label just one type as the best. Some people prefer to use their band saws for cutting stock to size while others like to put them to work on more intricate tasks such as polishing or performing delicate curves.

Your preferred workpiece and project type will determine whether you’re a horizontal or vertical band saw user, so here’s a quick guide to their pros, cons and ideal uses to help decide which one belongs in your workshop.

A horizontal band saw operates by holding your workpiece stationary while you swing the band saw blade through it, performing a precise cut.

This type of band saw is the clear choice for people who need to cut their stock down to size, and it can offer either a thin or thick cut depending on your needs. They offer extreme precision when performing a straight cut and are also found in larger-scale models at timber yards.

Horizontal band saws should have a home in all larger scale workshops. Due to their ability to work with larger pieces of stock, they are the ideal pick for people who need to perform regular and routine cuts to their materials.

Due to their wide variety, horizontal band saws vary significantly in price. A portable band saw will generally cost anywhere from $400 to $1000 depending on the model and capabilities. For a horizontal band saw withstand, this could set your workshop back a few thousand dollars. If you’re after a large scale machine for high volume production, the cost can be $6000 upwards.

Vertical band saws cut differently through the material than a horizontal saw, giving it a completely different set of benefits. The saw itself remains stationary on a vertical saw, and the workpiece is fed through the blade to create the cut. Because you are able to move the workpiece around as you wish, it opens up more possibilities for styles of cut and other functions.

These types of band saws work better with smaller workpieces and besides specialty cuts, a horizontal band saw can also file and polish finished pieces. It does have the ability to cut the simple stock to size, but not on the scale of horizontal band saws.

The vertical band saw is right at home in a hobbyist or small-time woodworker’s shop. Thanks to their versatility and ability to do much more than just cutting, they’re ideal for those without huge production requirements.

Vertical band saws are a lot cheaper than their horizontal counterparts, another reason why they’re more suited to the home user or small workshop. A quality band saw can be between $300 – $1000 for a standard model and up to $7000 for a floor model. Because each type has such different specifications, the cost will depend on additional extras and factor such as motor size and cutting capacity.

The horizontal vs. vertical band saw debate poses a nearly impossible question to answer as each machine is unique in their own rights and each performs such different tasks.

The vertical band saw is ideal for hobbyists or smaller scale workshops due to its ability to perform intricate cuts and its wider variety of capabilities.

The horizontal band saw works with larger pieces of stock so is likely to suit the functions required for a higher production workshop. Although those points should be considered, they still don’t completely determine whether you should have one or the other.

To solve the dilemma of which is best for your workshop, why not invest in one of the many vertical/horizontal band saws available on the market which allow you to transform your machine depending on your task at hand. This way you experience the best of both worlds and have one machine that’s capable of so much more.

If you have enough space in your workshop and coin in your pocket, investing in one of each would be ideal. This would save from changing your vertical/horizontal around each time, and a machine specifically crafted for one use is going to be of higher quality than one with shared capabilities.